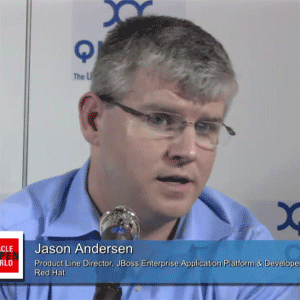 John Furrier of SiliconANGLE and Dave Vellante of Wikibon sat down with Jason Andersen, the Product Line Developer, JBoss Enterprise Application Platform & Developer Studio, a division of Red Hat to speak about JBoss, the cloud, and his current strategy for approaching the future of Platform-as-a-Service. Overall, Andersen brought a lot of insight to the table about how JBoss is set to affect the market by putting Java into the cloud where languages like Ruby and PHP primarily dominate.

Andersen says that the focus on the developer is all about productivity. A lot of frameworks can be abstracted into virtualization and the cloud, especially looking at companies like Salesforce.com and products like SaaS. The new market is all about how quickly people can get to market and he believes that’s where all the heat is: making sure that people can go from the drawing board to the market as quickly as possible.

He advises people building companies and innovating “at the speed of business” that first they should keep an open mind. Importantly, that means not getting locked into some technology just because it seems like the sweetest thing at the moment; the technology is a swiftly moving target and the pendulum swings quickly. Secondly, people should keep their options open down the road—there will always been some new cool framework; but at the end of it you’ll still have to maintain whatever you adopt or embrace. Basic agility and foresight would be the basic elements of what he’s suggesting by watching where the market’s going and not locking into anything too much.

When asked what’s changing in open source to make things go faster, Andersen sees the primary motivating force as the constant demand for more solutions. For example, Android—a massive, rampant growth product suite that based itself on a foundation of community. iPhone and Apple seemed pretty set in mobile and stood on a mountain; but Google came in with a well-tended, open developer community and overwhelmed them with a sea of apps that rose to meet the need for solutions.

Andersen believes that a shift towards Platform-as-a-Service is quite real and developers are looking to it for the ease of virtualizing their production environment, allowing them to load their project into a virtual machine and hit the ground running from there. As a result, his division has pushed JBoss right into a PaaS as method to bring a Java platform to the developers. They’d already seen that when it came to PaaS the dominating languages happened to be PHP and Ruby, but no Java, which he saw as the in to bring their language into the ecosystem.

“When we put OpenShift out there the goal was to support everybody, so it started with Ruby and PHP. Then of course, we noticed that Java hadn’t much traction yet and we saw an obvious opportunity there,” Andersen said on the subject. The gambit paid off, as now he mentions that he’s seen good traction with Java.

OpenShift is a Red Hat product that provides a suite of cloud-deployable portable apps and as a result delivers scalability—it’s available for Perl, PHP, Python, Ruby, and of course Java. They even added EnterpriseDB in May of this year to their partners.

The environment of the future will probably be huge when it comes to applications, Andersen believes. As we move towards the cloud people will begin to consume more of these services. As the cloud greatly lowers the barrier to consumption, it lowers the costs tremendously and permits virtualized servers to simply be grown out of any given hardware. It makes migration and enterprise production less of a burden and means that people can enter the field more readily.

Above is part one of the interview with Jason Andersen, you can watch part one and part two on SiliconANGLE.tv.