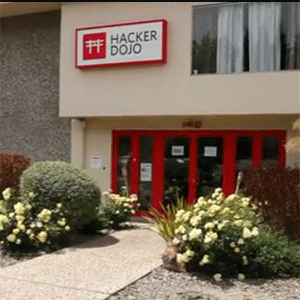 Hacker Dojo Auctions Off Its Geek Smarts for Charity

Geeks have always been greater than the sum of their stereotypes and the developer community center Hacker Dojo is taking that to the next level. The idea of an incubator isn’t one lost on us technological folks and bringing together great minds to saunas and summits or simply setting aside a space to be a hacker, an engineer, or a maker is a powerful way to bring innovation to our favorite subjects. They have recently pulled in $129K (of a 250K goal) including from a Kickstarter to aid in the construction of a developer space in Mountain View, CA—right around the peninsula in the San Francisco Bay Area.

Now that they’re doing so well, Hacker Dojo has decided to start farming out their very own geeks as fodder in a person-auction (an hour of their time for bid) to help save the dojo.

This is a location for events, lectures, parties, BarCamps, DevHouses, LAN parties, hackathons, knitting circles, tinkering, brainstorming, coworking, and more. While Hacker Dojo is technically a “members only” private club, we welcome visitors to many of our lectures and classes, and invite people to use the space on a drop-in basis as well.  The Dojo is a community space first and foremost – this means that the focus of the layout and activities is to lend itself to be a useful place to throw classes, host parties, brainstorm, and hang out.

If it were me, I’d say this is a place worth keeping.

The auction house is talking place on crowdfunding auction site Goodwillion and the money goes to a good DevOps cause: having a space for developers, inventors, and future sysadmins to ply their trade and network.

Some of the nerds on auction for the benefit of Hacker Dojo are actually quite amusing.

For example, a witty geek going by the name of FAKEGRIMLOCK suggests that an hour with him could be useful because he’s got an angle on startups that few have ever thought of: “ME, GRIMLOCK, GET ON SKYPE, TALK TO YOU FOR WHOLE HOUR. THIS GOOD CHANCE FOR YOU ASK ME ADVICE ON STARTUP IDEA, HOW TO RUN STARTUP RIGHT, HOW TO NOT BE MORON, OR ANY OTHER THING YOU PROBABLY DOING WRONG.” Contact if you’d like mentoring on startups over Skype—from a giant, transformer robot who looks like a T-rex.

Bidding is currently at $47!

If you’re more interested in how a scientist would plan your next party, think about signing up with Casey Greene: “I’m a scientist, but I love people and throwing events. Want to throw a party but don’t know how to do it? Let me plan it for you!”

And finally, who can go wrong with robots. Right now bidding for an hour of Katy Levinson’s time is running $46. “I make robots, code, and community, in no particular order. I’m the Director of Development at Hacker Dojo, a former Google backend engineer, a former NASA roboticist, and generally try to be upbeat. Cory Doctorow once described me as “Raw nerd charisma” and I found that flattering.”

Many from my community may hearken back to tales of thoughtful inventors riding in by train to a university near London, steam billowing about their feet and sparse luggage as they trekked through rain and smog to speak with like minded individuals. Visionaries like Tesla and others often communicated with other technologists of their eras and visited gatherings to gain sponsors and discover what others were working on.

Today, moving from place to place is much easier, and although in cities space is at a premium, we have technologies like Skype, webcams, and telepresence.

Having a workshop is a big deal to someone who works with Arduino or an RC-car-Kinect amalgam held together with brains-and-duct-tape and a quite place is good for a developer who carries her laptop and headphones everywhere with her to work on the next innovation for Google Glasses.

Think about throwing in a few bucks for the Kickstarter to save Hacker Dojo; or bid a $50 or more on one of their amazing geeks—an hour may be all you need to get the insights needed to make your startup or next project amazing.