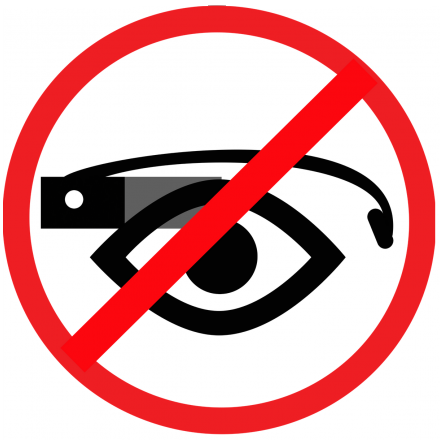 When Google Glass Goes Wrong: The Low Down and Dirty

It’s been for a while now that I’ve been extolling the virtues of wearable computing, and the advent of Google Glass; in fact, it’s easy to see how people could do some awesome things with Glass…but with every amazing technology comes drawbacks. In the case of Glass it’s been fueling the undercurrent of distrust and revulsion even before this product arrives.

The question of the social drawbacks of Google Glass sits solidly in the range of the juvenile and sociopathic–but it also lurks a little bit in how other people perceive users.

People will use it to ignore you

It’s not enough that people can glance down at their smartphone or tune you out in a conversation–but at least with a phone, it’s obvious what they’re doing. However, with Glass it’ll become possible to ignore someone (or multi-task) while holding a conversation with them. That person looking right at you? Are they paying attention or does that thousand-yard-stare mean that they’re surreptitiously looking up their next appointment or reading a Wikipedia article on banana pudding.

Google Glass is a reality augmenting device, which means that people might just be using it to look up quotes, check their stock ticker, or maybe they’re just checking their facts. It’s still a real low-down-dirty thing to do to someone else while they’re talking to and the fact that someone could be hiding behind that prism and be somewhere else may rub some people the wrong way.

People will use it to stalk romantic interests

We’ve already seen this one done with smartphones and it’s not pretty. We need only look as far as the “Girls Around You” app and see how creepy that something like augmented reality in Google Glass can get–with enough accuracy and fidelity about nearby smartphones owned by certain Facebook accounts it could be used to quickly update some snotty stalker in how to find the person they want to see and just happen to “bump” into them.

Add in facial recognition and a sidebar of information the person being looked at (right down to interests, hobbies, perhaps their past three tweets) and suddenly Glass becomes a know-it-all personal Cyrano de Bergerac with a side of creeptastic.

As much as people like being the center of attention, they don’t like being watched. In spite of the fact that we live in a society surrounded by surveillance devices, Google Glass is right there at eye level and may contain the ability to record anything at any time. As a memory augmentation, this could be amazing; as an extension of already overloaded social media filled with every past faux pas.

This particular fact of human nature is lampshaded by many science fiction authors and TV shows about people who innocently wear surveillance devices. Often they’re the friendly almost-journalist, recording their lives for posterity or for a mission brief; or they are a journalist, looking for a story. Sometimes the person is just a technology enthusiast who want to record their own experience–but as I’ve mentioned before, other people want to control their identity in everyone else’s experience.

Becoming “that guy” or “that girl” will alienate all of the friends of a Google Glass wearer because that function alone gives people the willies. That not only are they being watched by their friend, but that they’re being judged by untold and yet-unseen others.

It could be used to spy on the wearer instead

Right now, it’s becoming obvious that wi-fi enabled devices come with risks–one of those risks is that they could be used by people other than the intended user. It’s been in the news recently that wi-fi enabled cameras might have security holes and that doesn’t yet even extend to juvenile-minded hackers who use remote access trojans to spy on young women via their webcams.

Now, imagine going out for the day and Google Glass turns its camera on. It starts streaming, unbeknownst to you, and someone else is now seeing everything you see. It’s an entirely new type of violation that didn’t exist before–the Hawthorne Effect in reverse, instead of being watched, someone else is watching what you see.

Of course, that’s not the end of it. Getting Google Glass hacked may mean getting spied on or have personal information pilfered; but it could also mean malware would have a much more prominent place to throw advertisements. Right out of William Gibson’s Neuromancer where two sentences describe a man who had bionic eyes hijacked by hackers (or malware) that now forever would display a scrolling advertising across the lower 1/3rd of his vision.

And then there’s this…

It may be unlikely that even Google Glass will function like this, but I couldn’t write this list without a little humor.

The image at the article top is from an anti-Google Glass outfit called Stop the Cyborgs; the London-based campaign seeks to make people aware of the social and health issues associated with Google Glass and similar technologies.