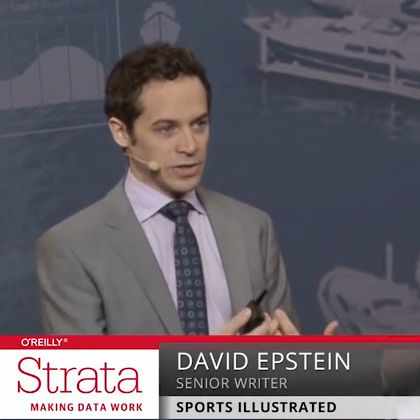 A new angle in sports : Winning the gold with Big Data | #BigDataSV

As part of this year’s Strata Conf. in Santa Clara, titled “Making Data Work”, David Epstein, Senior Writer with Sports Illustrated, delivered a Keynote which aimed to explain the role of “Small Data in Sports” and how “Little Differences Mean Big Outcomes.”

“I want to talk about high performance in sports and what makes the difference between a top performer and everybody else,” began Epstein. Because today’s high performance sports are “drowning in data” and applying it to “remarkably little effect,” Epstein believes that most people do not understand Big Data and “they are not figuring out where and how it should be applied.”

“The difference between legendary and anonymity in elite sports is usually less than one percent,” said Epstein. He played the audience a sound displaying the time of crossing the finish line of the world’s fastest nine men. These men were all differentiated by milliseconds.

“The first beep was Usain Bolt, the second was a guy you’ve never heard of and the fourth was a guy that works as a roofer in the off season,” explained Epstein. “The difference between Usain Bolt and the guy you never heard of is 0.5 percent.”

Epstein believes the key value of the sports data being gathered is “really figuring out how to find that 0.5 percent difference in the data.”

“I won’t go into the frequent misapplication of data in sports, but I will focus on one successful application: UK Athletics, the sports body in Great Britain. They had an increase in funding when London won the Summer Olympics, so they decided try apply some sports science. Rather than just continuing to gather huge amounts of data, which is what most sport bodies are doing, they tried to figure out what they could actually affect before gathering tonz of data,” explained Epstein.

To do that, they wanted to look at an event where they thought they could win some medals – the field events in track. They analyzed the Shot put and tried to find out what determines how far the shot goes.

They narrowed it down to three things:

Epstein exemplified with the 2007 competition between Reese Hoffa (gold medalist) and Adam Nelson (silver medalist), two of world’s best people in Shot put, analyzing the differences between the two and how it affected their performance.

When UK Athletics realized the importance of their findings, they were curious if it could be applied to other sports. So they hired a Biomechanics PhD to look at long jump, creating a new job title for him: ‘horizontal jumps specialist’.

Epstein explained: “This guy’s job was to watch jumpers over and over, deciding what he could change.”

He found out that speed is incredibly hard to coach, just like the force into the board, so he ignored them altogether. But he could change the angle. He worked intensively with Greg Rutherford on his jump angle and the results were spectacular. At the London Olympics Rutherford did not have the fastest approach, nor the best force on the jumping board, but he jumped at precisely the right angle (23 degrees) and won the gold medal.

The horizontal jumps specialist’s merit was taking a guy who was not the best athlete in the world and win him a gold medal by figuring out – quite simply – what was important and what could be changed.

It was this data science that went to the surge in medals for UK Athletics at their home Olympics.

During his presentation Epstein also investigated the so-called 10,000-hour rule, to uncover whether rigorous and consistent practice from a young age is the only route to athletic excellence.

Watch the entire segment below to see Epstein dispel many of our  misconceptions regarding the reasons of top athletes’ excellence.