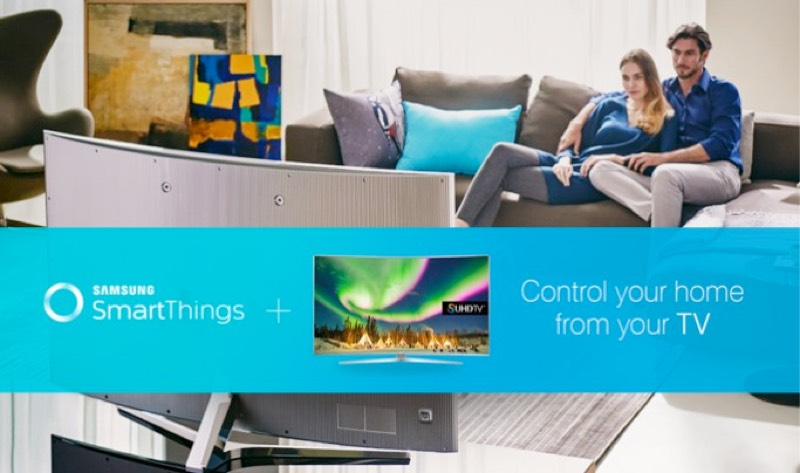 One TV to rule them all: New Samsung TVs will act as a hub for all your connected IoT devices

Would you use your television as the main hub for your Internet of Things (IoT) smart devices?

Samsung Electronics Co., Ltd. thinks the answer to that question is yes, with an announcement Tuesday that its new lineup of smart televisions will do exactly that.

According to the company, all of its 2016 SUHD TVs will apply IoT hub technology that will allow each TV to act as the controller for the entire smart home through the use of the SmartThings IoT platform.

The SmartThings platform itself comes from a Palo Alto, CA, startup that was acquired by Samsung in 2014, and it allows users to control not only Samsung and SmartThings devices, but also more than 200 other SmartThings-compatible devices, including everything from connected lights and locks to thermostats and cameras, from a range of third-party manufacturers, including 2gig, Aeon, Bose, Cree, D-Link, Danolock, Ecolink, GE, Intermatic, Kwikset, OSRAM, Sladge, Zen and a number of others.

It is noted, though, that for the full support of connectivity with SmartThings-compatible devices, a SmartThings Extend USB adaptor is required.

“With Samsung Smart TVs working with the SmartThings technology, we have an opportunity to reach millions of households,” SmartThings Chief Executive Office and Cofounder Alex Hawkinson said. “Applying this technology into current household devices is a major step forwards that will make it much easier for everyone to experience the benefits of a smart home.”

While the implementation of IoT-connected devices in the home may be popular among first adopters and those with a particularly strong tech fetish, the market itself still has a long way to go to becoming widespread in the home.

Gartner predicted in November that 6.4 billion connected things will be in use worldwide in 2016, up 30 percent from 2015, and will reach 20.8 billion by 2020. And all of those devices will need a central point from which to access them from.

The natural answer would be from a smartphone but that belies the fact that for at least some of the market, the use of an IoT access app may be confusing; you could generalize that the demographic who would struggle would be those who are older, but tech illiteracy isn’t necessarily defined by age.

Few, though, would struggle to operate a television by comparison, and this is where Samsung televisions would step in.

In practice, the IoT hub itself on the televisions may also be pleasurable to use, so it’s not just the technologically illiterate who may find the offering appealing.

Samsung said it would demonstrate the new televisions at the Consumer Electronics Show in Las Vegas in January.