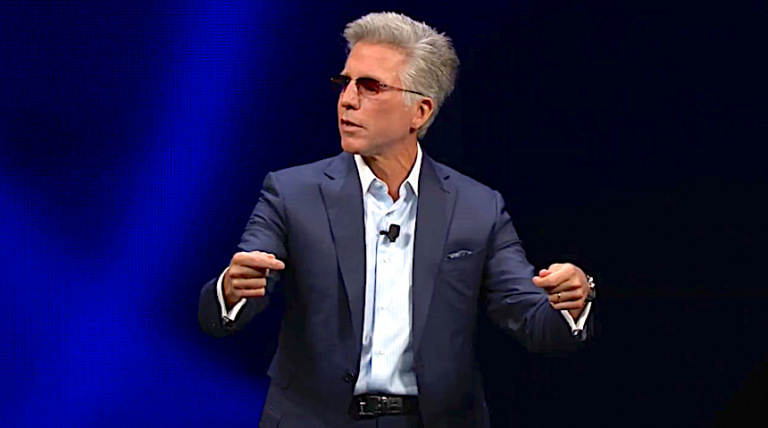 The information technology services management company reported earnings of $1.03 a share, beating consensus estimates of 99 cents. Revenue jumped 32%, to $899 million, beating estimates by $10 million. The numbers should have surprised no one, since the company pre-released earnings yesterday.

But they were apparently news to investors, who bid the stock up nearly 6% after-hours. The gains more than erased the day’s 3.65% drop in ServiceNow stock in today’s trading session and put shares within striking distance of their level before the change in leadership was announced.

That’s a big turnaround in 24 hours; the stock dropped as much as 15% after-hours yesterday after the company announced that former SAP SE CEO McDermott (pictured) would replace ServiceNow chief John Donahoe, who is leaving in January to take the top spot at Nike Inc.

The company said it sees no immediate slowdown in its growth, guiding fourth-quarter revenue expectations to between $897 million and $902 million, representing 35% growth. For the full year, it expects revenue of $3.3 billion, up 36%.

Clearly eager to reassure jittery investors, Donahoe led off today’s call with analysts by explaining that his decision to leave was prompted by a “unique opportunity” to join Nike, on whose board he has served for five years.

“I believe deeply in ServiceNow and its opportunity,” he said. “We’re in a great position to get to $10 billion and become a great and enduring company.”

Donahoe said he intended to stay at ServiceNow for the long term but the Nike job was too good to turn down. “I deeply resonate with Nike’s purpose and I regularly use them as the gold standard of what a successful company looks like,” he said, adding that he will be “fully accountable” for ServiceNow’s performance until the end of this year.

McDermott was effusive in his praise for his new employer. “This is one of those dream-of-a-lifetime kinds of opportunities,” he said. “My feet haven’t touched the ground.”

ServiceNow’s high customer satisfaction — renewal rates stood at a record 99% in the latest quarter — and its 51% share in Gartner Inc.‘s global Experience Management: IT Service Management market are the foundation for what McDermott called an “organic growth story that is just amazing, and it’s only just begun.”

Notably for a CEO who engineered 29 acquisitions while at SAP, McDermott said he doesn’t expect to be acquisitive in his new role.

“SAP did a great job of taking the core and extending it to the perimeter with [mergers and acquisitions],” he said. “With ServiceNow it’s a matter of expanding the solution set and getting to new customers and geographies, but all the pieces are there. On M&A I would be very careful.” ServiceNow derived two-thirds of its revenues from North America in the quarter, a figure is typically closer to 50% at more mature companies.

The foundation appears strong. ServiceNow’s remaining performance obligations, or contracted revenue that has not yet been realized, stood at $5.6 billion at the end of the quarter, up 33% from last year. The number of customers spending more than $1 million a year reached 809, up 32% from 612 a year earlier. A full 92% of revenues came from subscriptions.