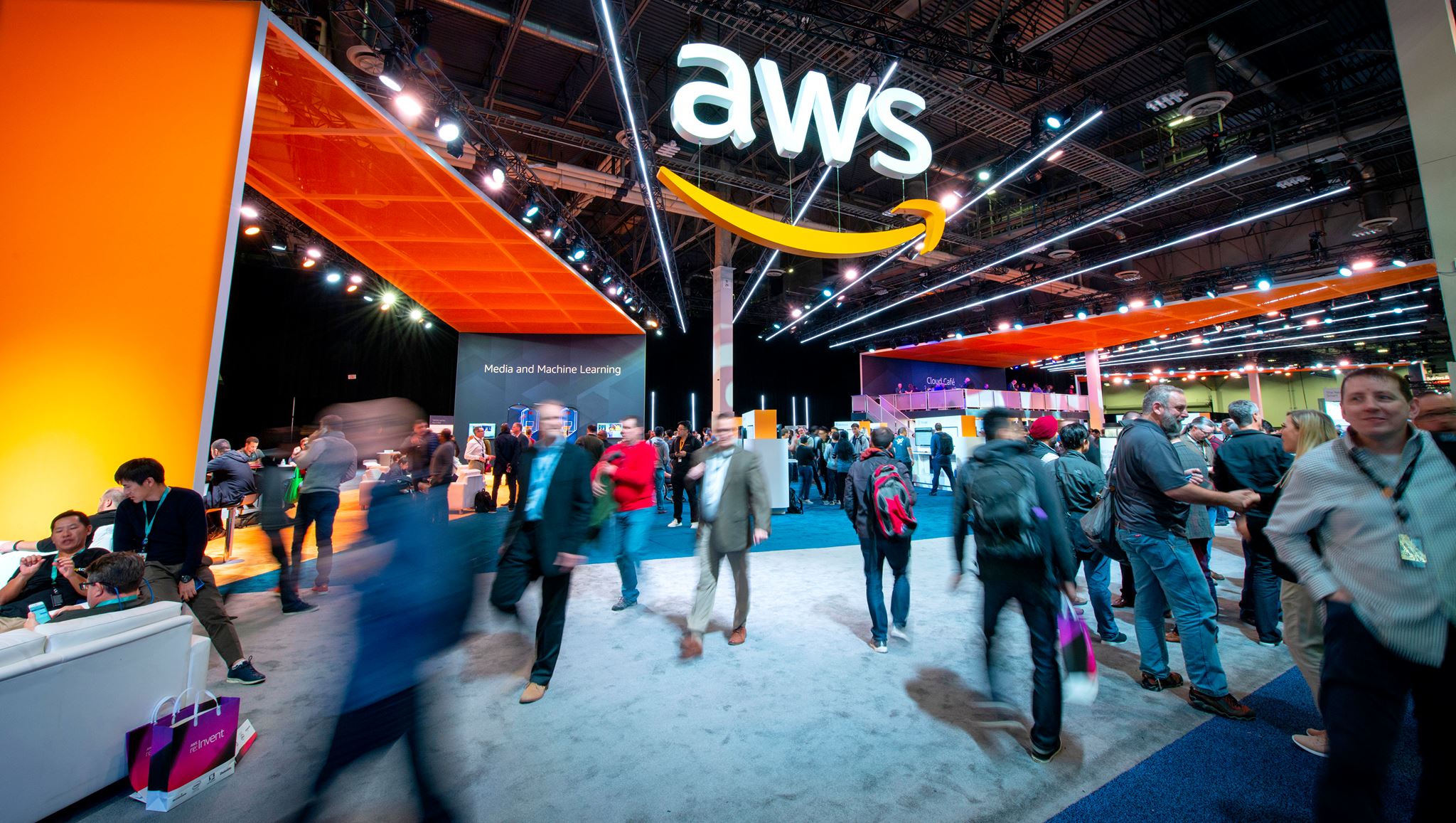 Analysis: Cloud 2.0 is upon us, and Amazon is still leading the way

With Amazon Web Services Inc.’s annual re:Invent conference just around the corner, the spotlight once again falls on Amazon.com’s Inc.’s cloud computing company and its dominance of the public cloud — and this year’s event comes at a critical time.

As the public cloud enters the Cloud 2.0 era, the talk is no longer about “digital transition,” but rather “digital transformation,” or the end-to-end modernization of enterprise information technology. Cloud 2.0 is changing the game, with new architectures driven by data, machine intelligence and cloud at scale, leading to unprecedented innovation and the creation of entirely new companies and business models.

But just how pivotal a role is AWS playing in this transformation? And how do its competitors, both in the cloud and in legacy IT, stack up? Those are the questions Dave Vellante, chief analyst at SiliconANGLE sister market research firm Wikibon and co-host of SiliconANGLE’s video studio theCUBE, attempts to answer in his latest Breaking Analysis video.

One of the most reliable ways to compare information technology providers is to look at where the spending action is, and as Vellante points out, a quick glance at the latest data from Enterprise Technology Research shows us that all of the major cloud providers are seeing some strong momentum in that regard.

ETR’s data shows us that AWS is clearly still growing fast and it remains the biggest cloud player. Other market data from Wikibon and various third party sources show that AWS’ infrastructure-as-a-service business last year was about three time larger than that of Microsoft Azure. But it’s notable that its lead is slowly being eroded by Microsoft, whose Azure cloud business is growing at a much faster clip. 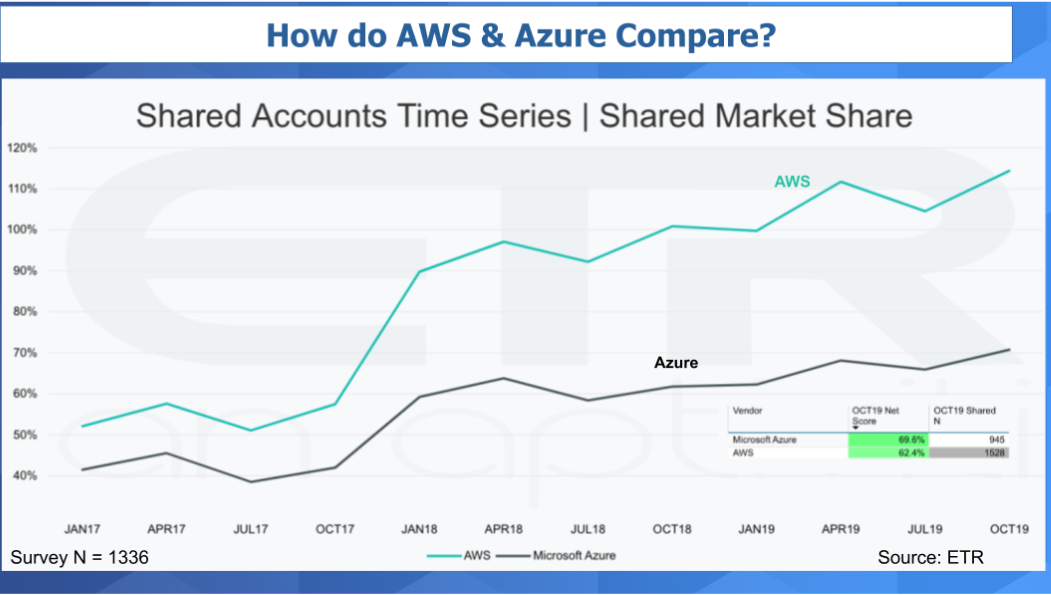 “Microsoft is closing the gap,” Vellante said. “The Wikibon team think AWS will come in at $35 billion this year. And they have Microsoft’s IaaS business at around $15 billion, or 43% of AWS’ business. So you can see Microsoft is catching up.”

That may be so, but AWS also enjoys a strong position in some of the most important sectors in the cloud, which suggests it’s unlikely to be unseated from its top spot anytime soon.

One of AWS’ biggest strengths lies in databases, particularly data warehouses, which aggregate structured data from multiple sources so it can be compared and analyzed for business purposes. ETR’s data shows that Amazon’s Redshift achieved a strong net score, which is a measure of spending momentum, of 61.8% in the last quarter.

Notably that puts it behind Snowflake Computing Inc.’s Snowflake data warehouse, which had a net score of 71.4% in the last quarter, but it’s also way ahead of legacy companies such as Teradata Inc. and IBM Corp. Those “old guard” firms once dominated the sector but now find themselves dealing with negative net scores, which means enterprises are spending less money on their products than they did before. 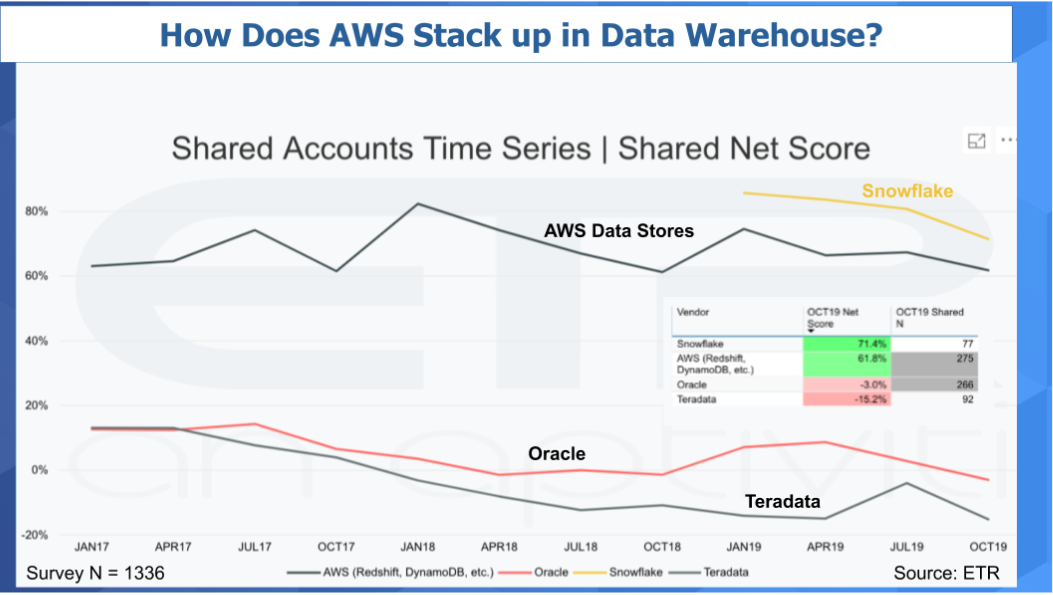 “You can see the classic innovator’s dilemma at play here where AWS and Snowflake are in the green and the legacy players are firmly in the red,” Vellante said. “But there’s something new going on in the cloud, with a new trend emerging that’s driving new workloads. All this data now sits in the cloud and customers are using data stores like Red Shift and Snowflake to get more insights out of that data. They are bringing tools like Databricks to the equation and driving a whole new set of workloads that are not just about provisioning infrastructure but rather extracting insights much more quickly from data.”

Similar trends are going on in other key sectors of the cloud too, Vellante said. For example in analytics, both AWS and Microsoft Azure are looking very strong, once again gaining market share at the expense of legacy firms. 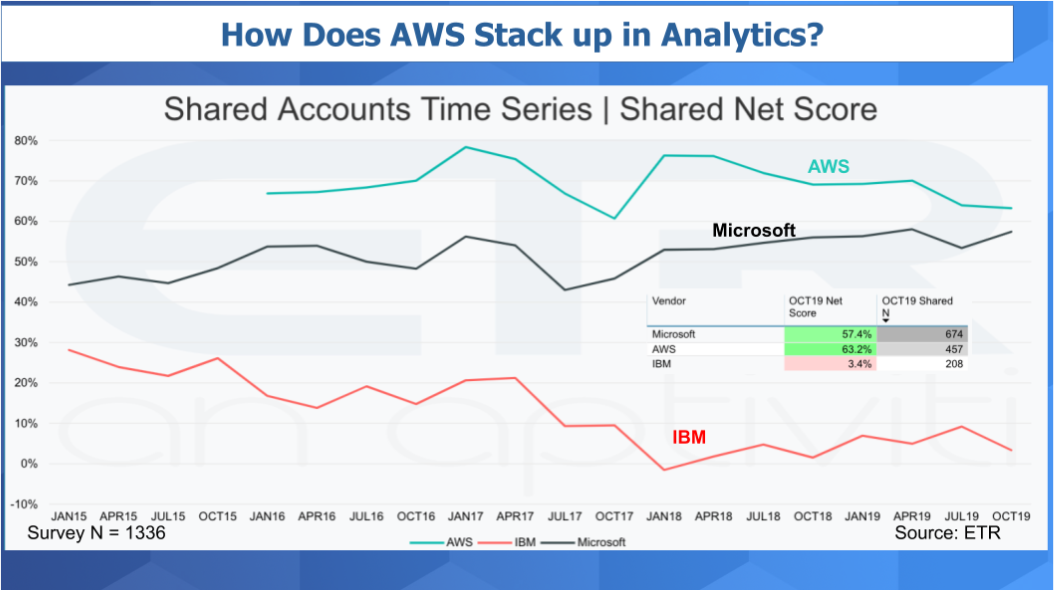 “I’m not trying to pick on the legacy players, but I think it’s important to provide context,” Vellante said. “And when it comes to spending momentum the data doesn’t lie. IBM has a sizable and impressive set of capabilities in the analytics space but you can see where buyers are placing their bets.”

AWS and Azure are also pretty much neck-and-neck in the artificial intelligence and machine learning arena, with considerably more momentum than IBM Watson, for example. And it’s much the same story with software containers and functions, where Amazon’s Lambda and Elastic Container Service both enjoy positive net scores with regard to spending, putting them ahead of Pivotal Software Inc.’s Cloud Foundry, for instance.

The old guard, meanwhile, is clearly feeling the pinch, as more money being spent on the cloud inevitably means that less is going toward their legacy products and services. The following graph shows how spending on traditional IT companies has slowly declined over the last decade. 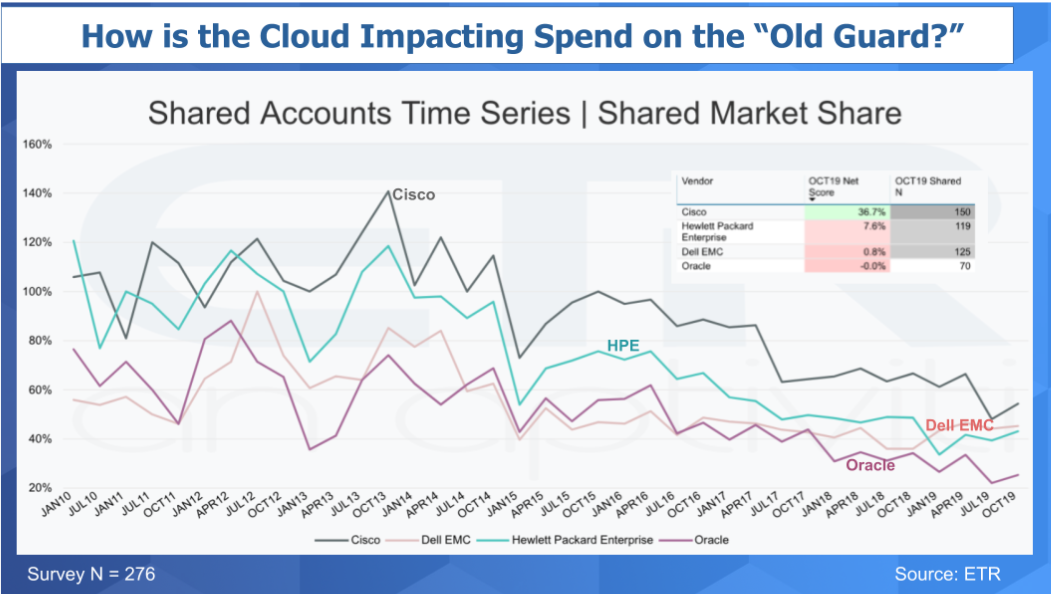 “The story is clear,” Vellante said. “Coming out of the downturn in 2010 the big legacy guys who were holding their breath came up for air and saw lots of pent-up demand. But the cloud has continued to slowly eat away at their share and their spending momentum as seen by the net scores in the table.”

Vellante noted that networking giant Cisco Systems Inc. is the only exception with a fairly strong net score of 37%, but that’s mainly because the company’s heritage means it’s in a good position to connect and secure data moving across clouds. Still, he said the evidence suggests that the cloud’s long and steady march will only continue in the direction it has been going. And AWS, he contends, will surely be at the forefront.

“Cloud 2.0 is here and it’s getting more complex,” Vellante said. “The so-called old guard is hanging onto its installed bases but in many ways is working hard to get simpler. Will these two domains — the cloud-native and the cloud wannabees — reach an equilibrium of sorts? Not functionally, but there are many opportunities for the large whales to capitalize on a consolidating industry and compete.”