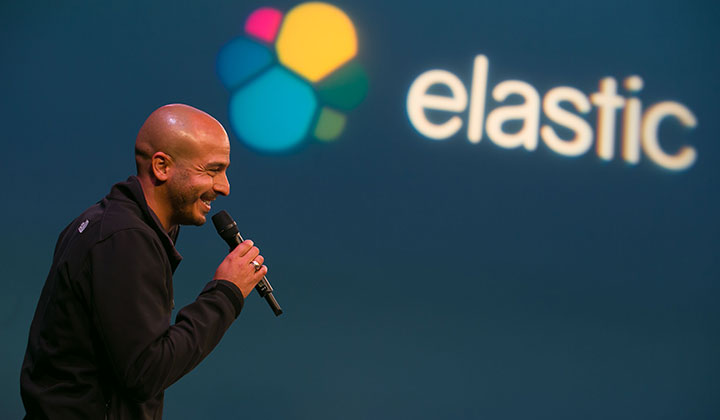 The company reported a loss before certain costs such as stock compensation of 8 cents per share, lower than both its own projected range of a loss of 15 to 18 cents per share and Wall Street’s forecast of a 16-cent-per-share loss. Revenue for the period roses 44% from a year ago, to $177.6 million, well above Wall Street’s forecast of $157.9 million.

Elastic is best known for its tools that are based on the popular open-source Elasticsearch platform. It’s used by enterprises to store, search and analyze massive volumes of both structured and unstructured data quickly, in nearly real time. The platform serves as the underlying engine for millions of applications that have complex search features and requirements.

However, Elasticsearch also has its fingers in observability, with tools that are used to track network performance, and in threat detection. It’s these businesses that are proving to be the real growth engines nowadays.

Elastic co-founder and Chief Executive Shay Bannon (pictured) said the strong quarter capped an “exceptional year” that was based on continued adoption of Elastic Cloud and broad demand for its observability and security offerings.

“Data volumes keep increasing as companies become more digital and move to the cloud, and our customers are seeing that the ability to search, observe and protect this ever-increasing amount of data is critical to their success,” he said.

The company highlighted that its security software business is now its fastest-growing segment, making up 20% of its overall revenue during the quarter. Observability is actually the biggest segment now, accounting for just over 40% of Elastic’s revenue. Search software provided about a third of its revenue.

Like many software companies, Elastic has been pushing to get its customers to move to cloud-based subscriptions instead of using perpetual licenses, because the model offers a more predictable revenue stream. And the company said the transition is going well. It reported software-as-a-service revenue of $51.3 million for the quarter, up 77% from the same period one year ago.

Shareholders were delighted with the numbers. Elastic’s stock jumped more than 12% in after-hours trading following the earnings report.

They were even forgiving of Elastic’s mildly disappointing guidance for the next three months. The company said it sees a loss of 10 to 13 cents per share on revenue of $171 million to $173 million in the first quarter. Wall Street is modeling a 12-cent loss on revenue of $169 million.

The full-year picture is better, with Elastic eyeing fiscal 2022 revenue of $782 million to $788 million, which is some way clear of Wall Street’s projection of $743.3 million.

Analyst Holger Mueller of Constellation Research Inc. summed it up, saying that Elasticsearch has expanded its offerings and put itself on track toward breaching the $1 billion revenue milestone in the near future. “That is the knighthood for a startup,” he said. “Most importantly, Elastic is showing good cost management while growing. Investors can stomach the losses when it’s showing 40%-plus top-line growth.”