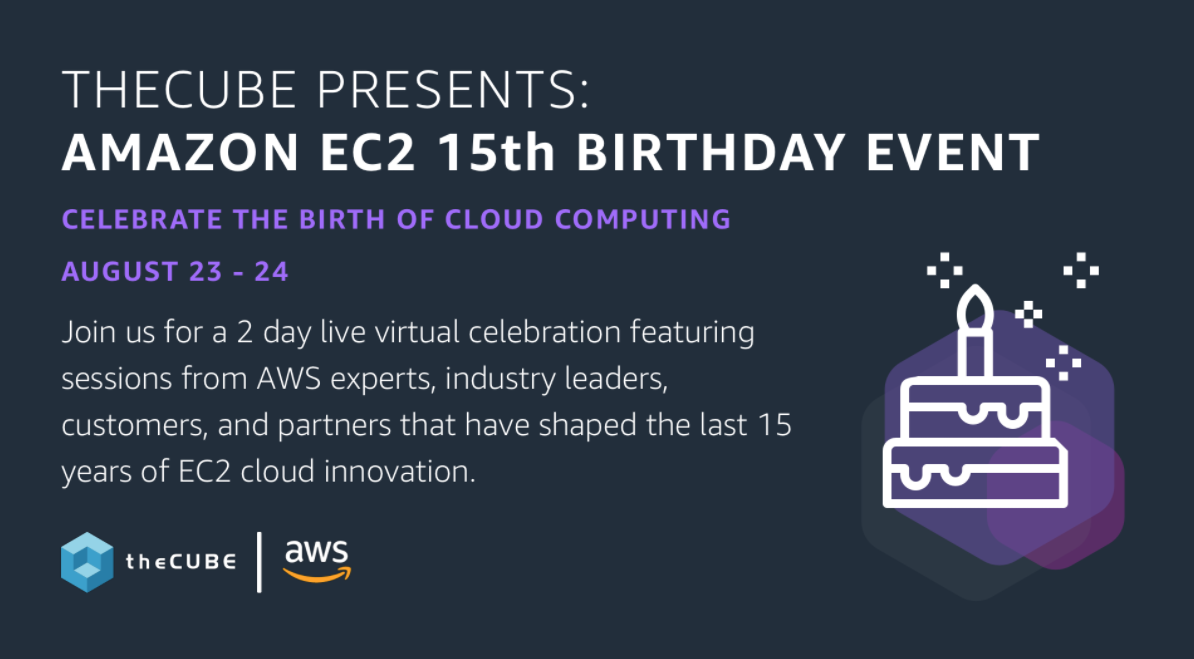 Amazon’s Elastic Compute Cloud, or EC2, turns 15 years old this year, marking a significant milestone for both the company and the computing world it serves.

It’s hard to imagine an enterprise product or service that has not been influenced in some way by EC2 over the past decade and a half. Elastic resources provided in an as-a-service model fueled the cloud juggernaut that became AWS, which currently accounts for nearly half of its parent company’s overall operating income.

AWS has planned a two-day live virtual celebration of EC2, featuring sessions with AWS experts, industry leaders, customers and partners, who will discuss 15 years of EC2 and what the next decade may have in store. The two-day event begins at 9 a.m. PDT on August 23. TheCUBE’s, SiliconANGLE Media’s livestreaming studio, coverage of the “Amazon EC2 15th Birthday Event” will include interviews with AWS’ Sandy Carter, vice president of worldwide public sector partners and programs; Raj Pai, vice president of EC2 product management; and Joshua Burgin, general manager of AWS Outpost. (* Disclosure below.)

In the lead-up to this month’s celebration, AWS has generated a flurry of announcements surrounding its signature product. Most notable has been the news that EC2-Classic — which was first launched at the birth of EC2 in 2006 — would be retired later this year. Customers running EC2-Classic will be migrated to an Amazon Virtual Private Cloud. In addition, AWS launched five new EC2 instances in December and announced Warm Pools for EC2 Auto Scaling in May, which shortened the timeframe and cost for scaling out applications.

However, it is on the processor side where much of the innovation surrounding EC2 has taken place. Over the years, AWS has tied its EC2 instances to advancements in chip computing power. SiliconANGLE Media reported that nearly 50% of new EC2 instances shipped in 2020 were Arm processor-based and the company is following a plan to migrate away from x86 and incorporate its own design.

“Alternative processors are taking off,” said Dave Vellante, co-founder and chief research officer at Wikibon and host of theCUBE, in a recent AWS analysis. “AWS spent a lot of time on Graviton. They laid out their case that these specialized processors they are developing are more efficient.”

Amazon’s work with EC2 and Graviton are paving the way for another important initiative — telecommunications. AWS has set its sights on the 5G telco cloud, and radio access network sites will be running on Graviton2-equipped Amazon Outposts platforms starting next month.

AWS has been quietly building its presence in the telecom industry. Data recently provided to Wikibon, SiliconANGLE’s research arm, by Enterprise Technology Research shows that spending momentum has propelled AWS, along with Microsoft Azure, to a massive presence in the telco sector.

Amazon’s growth in the telco space is being further accelerated by a series of customer wins. Mavenir Inc. announced in May that its 5G solutions would be built on the AWS platform. AWS has announced that it will leverage Wavelength, which can facilitate creation of EC2 instances, in a partnership with Verizon Inc. to deploy the first joint telco/hyperscaler mobile edge cloud.

Yet it is Dish Network Corp.’s decision in April to build its core 5G network on AWS that may be most noteworthy. The agreement signaled a shift over the past year in the telco view of major cloud providers as network enablers rather than competitors.

“The telco use of public cloud, before early last year, was viewed as heresy. It was viewed as giving up too much control to a competitor,” said Roy Chua, founder and principal of AvidThink LLC, in an interview with theCUBE. “It wasn’t until last year that we saw a thawing of relationships between telcos and the public cloud providers. As a result of that momentum, it’s now more acceptable for telcos to use public cloud infrastructure as IT infrastructure and perhaps even as a network platform. It’s happening, but it’s early.”

What does the future hold for EC2? Aside from EC2’s role as a key strategic piece in the evolution of AWS’ telco cloud strategy, the company has shown an interest in broadening the 15-year-old technology to encompass multiple new use cases. Late last year, AWS announced EC2 Mac instances, which enable users to run on-demand macOS workloads for the first time on the Amazon platform.

AWS is also cultivating EC2’s capabilities in the security arena with Nitro Enclaves, which offers CPU and memory isolation for EC2 instances. In February, AWS made PrivateLink for Amazon S3 generally available to facilitate private connectivity between S3 and on-premises resources over secure connections.

“As an analyst, there is no way to keep up with the breadth of services that EC2 has, or at least I can’t,” Chua said. “Just about everything you want — AI/ML, databases, analytics, storage, automation, etc. — it’s all there.”

The Amazon EC2 15th Birthday Event is a livestream event that will be featured on the AWS channel on Twitch, with additional interviews to be broadcasted on theCUBE. You can register for free here to access the live event. Plus, you can watch theCUBE interviews here on demand after the live event.

We offer you various ways to watch the coverage of the Amazon EC2 15th Birthday Event, including on the AWS channel on Twitch and on theCUBE’s dedicated website and YouTube channel. You can also get all the written coverage from this year’s event on SiliconANGLE.

(* Disclosure: TheCUBE is a paid media partner for the Amazon EC2 15th Birthday Event. Neither Amazon Web Services Inc., the  sponsor of theCUBE’s event coverage, nor other sponsors have editorial control over content on theCUBE or SiliconANGLE.)